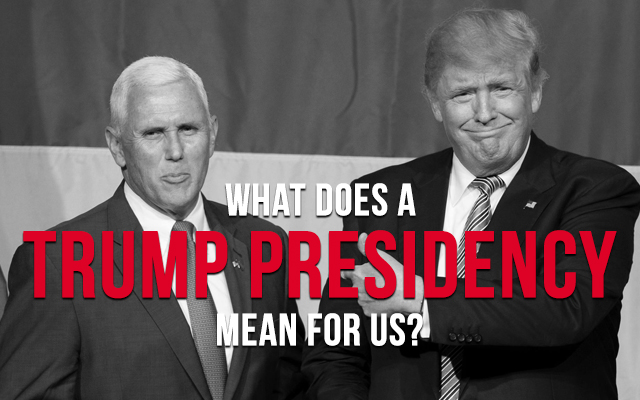 It’s been an emotional week for all of us. I’m still in shock—actually, I’m still in denial—a lot of us are, I think. I also think we’re allowed time to mourn the injustices, and mourn our future—we need time to come to grips with what the next 4 years will bring for the LGBTQ community. 2015 was a landmark year for us—for our equality, for love—and I don’t think the realities of what the incoming President and Vice President  are planning to bring down on us have quite set in yet.

Donald Trump is famous for backpedaling when it comes to every and any issue. First, he said women who get abortions should be punished, then walked it back and said the doctors that perform the abortions should be punished instead. Then he said that there should be, “Some form of punishment,” but didn’t specify exactly whom should be on the receiving end of that vague threat of punishment. In a recent interview with 60 Minutes, the President-Elect said that he would appoint a Supreme Court justice committed to the repeal of Roe v. Wade.

He has made horrible comments about immigrants, Mexicans, Muslims, Megyn Kelly, a disabled reporter, the Clinton family, every other Republican running for POTUS, a gold star family, Judge Gonzalo Curiel, John McCain, Pope Francis, Bernie Sanders, Elizabeth Warren, Katy Tur, multiple reputable news publications, John Oliver, the AP, CNN, Politico, and the election process itself [Author’s note: this is only a small selection of the many people and institutions he’s disparaged and belittled over the course of his campaign]. He is rude, reactionary, and has admitted that he has no respect for minorities, or anyone whose last name isn’t ‘Trump’. He consistently and constantly claimed over the course of the election that it was ‘rigged’, and that he would only accept the results if he won—which, unfortunately, he did.

He condemned marriage equality, then said he didn’t care, and then was seen a couple of weeks ago holding a Pride flag (upside down) with some bland Trump-related adulation scrawled across it in Sharpie. He’s erratic and quick to point his stubby fingers and then deny he’s said anything in the first place—even when presented with bountiful evidence to the contrary. He’s made countless derogatory remarks about and to women, the best/worst of which was when he interrupted Hillary during the final presidential debate to call her a ‘nasty woman’. On a hot mic in 2005, he openly advocated sexual assault (“Grab them by the pussy”) and that his fame and money allowed him to get away with touching women in unwanted and inappropriate ways. In short, he’s a PR nightmare and absolutely the last person who should be sitting in the Oval Office. He’s unqualified and just plain stupid.

Mike Pence, unfortunately, is not stupid. He’s the one we’re going to have to watch out for—and fight hard against—over the next four years. Not only does he look like Voldemort if Voldemort had too many filler injections, but he’s also anti-woman, anti-LGBTQ, anti-marriage equality, and thinks you can ‘cure’ gay, transgender, and bisexual people with electro-conversion therapy. Not once has he flip-flopped on any of these issues, either. Are you frightened yet? You should be.

Mike Pence does not believe in women’s rights. He believes that working, single mothers irreversibly damage their children. He also believes women shouldn’t be in the military, and cites Mulan (the fucking Disney movie) as an example of why it’s ‘bad’: Mulan and Li Shang fall in love, and clearly that’s unacceptable and puts the country at great risk. Y’know, because the menfolk can’t resist the allure of pussy, even though men and women have been fighting together (successfully, for the most part) on the front lines since 1917. Remember those wars we won? I think there were two really big ones, but my tiny woman brain isn’t sure. Golly!

Mike Pence also hates gay people. Normally I’d make a joke about how severely anti-gay folk often are the ones trying to repress their own latent homosexuality, but now isn’t the time for my amazing sense of humor. He legitimately hates us, and believes firmly that we are a detriment to society. He probably also believes that we convert people, like vampires or something, maybe through oral sex? He’ll put someone on that to find out.

He believes homosexuality, bisexuality, and being transgender are choices. He disagrees with Lady Gaga in that, no, we are not all born this way. He believes that we’re all born straight and cis-gendered, and that anyone who falls under the LGBTQ umbrella can be ‘cured’ of this wretched, cursèd lifestyle. He believes in the widely-debunked practice of electro-conversion therapy. For those who haven’t heard of that, it’s the stuff of nightmares: basically, you take a gay/bi/trans person…and you electrocute them until they’re straight/not trans! It is nearly 2017, and there are people who still believe that this is a legitimate, viable practice. Mike Pence, our Vice President-elect, is one of them.

Mike Pence would also like to roll back marriage equality, partially because he’s homophobic, partially because of religion (which, I can’t stress enough: has no place in government), and partially because he’s a fucking asshole who apparently can’t stand to see people happy. If he has it his way, he would probably just round us all up and have us killed, but that probably won’t fly with the rest of the government, so he’s planning to do the next best thing by taking away our right to marry.

Mike Pence is barbaric, cruel, intolerant, and exactly the wrong person to be whispering into Trump’s ear for the next four years. But here we are.

Now, here’s a bit of a bright spot: the constitution does, in fact, protect same sex marriage. The purpose of the constitution is to specify the powers, limits, and functions of the government. There are many rights U.S. citizens enjoy that aren’t spelled out in the constitution or the bill of rights—this is why it’s been such a durable document. It exists as a framework, the skeleton that our civil society can use to balance the social contract, the relationship between individual and society. If Mike Pence’s primary issue with same sex marriage is based on a religious ideology, all well and good: then do not practice it. But the beliefs of one group cannot be used as grounds for denying another’s civil liberties. Basically: they can’t use the notion of God/gods to justify taking away our right to marry (although I’m certain they’re going to try their darnedest). There has never been a society that has been improved by declaring that a right belongs to some of its citizens and not to others.

I know a lot of this seems hopeless right now, and the future seems bleak and unfriendly. I know most of you are still sitting there, horrified looks on your faces as you read the words I (and many, many others) have typed over the course of the past handful of months. I know it’s scary, and I’m sorry. From the bottom of my little bisexual heart, I’m sorry that we had made such progress, only to watch it start to crumble under the fist of a small-handed, cruel man and his sycophantic albino lapdog. If the Democrats controlled congress, or had gotten just a few more seats, we might at least have a fighting chance… but the Democrats lost across the board. The people who have been standing up for us no longer control anything as of January 20, 2017.

What we can do is fight. Michelle Obama said it best in her speech this past July: “When they go low, we go high.” We are strong, capable, amazing people, and we’re equipped to fight whatever comes our way and rise above it. Organizations like the American Civil Liberties Union, Planned Parenthood, NAACP, the National Women’s Law Center, RAINN, Running Start, the Southern Poverty Law Center, and many more organizations found here need your help now more than ever. These pro-woman, pro-immigrant, pro-LGBT, pro-Earth, anti-bigotry organizations are going to fight with you and for you in the coming years. They will stand up for your rights, your liberties, and will be your allies in the face of unfathomable hatred. As an amusing side note, if you donate to Planned Parenthood you are awarded a certificate; I’ve heard that people have been sending their certificates to Mike Pence, which delights me greatly. I’m not condoning this, but really, I can’t keep an eye on all of you…

So, fight. Write letters to your local, state, and federal officials. Call them, voice your displeasure, explain to them why you feel the country is moving in a dangerous and unstable direction. Vote in mid-term elections. Picket, petition, protest, make a fuss: don’t take this lying down. Don’t sit back and watch and cry as your rights and freedoms are stripped away—I know I won’t be. These people aren’t just a danger to the LGBTQ community; they’re a danger to anyone who is not a white, heterosexual, able-bodied, cis-gendered male. At the risk of sounding a bit too like one of those anti-drug ads from the 90s: no one is safe.

I like to believe people are capable of change. I would like to believe that someone Mike Pence and Donald Trump both respect will tell them that what they have in store—not just for us, but for pretty much any other minority group— is unfathomably draconian, unfair, cruel, and unusual. I would like to believe that more people will tell them having a white supremacist as Chief Strategist and a climate change denier as head of the EPA are probably not the sanest or best choices. Obama and Hillary didn’t always believe in marriage equality, and they changed their minds: they progressed as society progressed, because they understood that social attitudes and mores were shifting, and that regressive legislature would only damage the American people. I hope that members of Congress will at least have a shred of decency—of humanity—when Trump and Pence try to roll these awful things through, and I hope that they will see their way to at least putting up some road blocks to make it more difficult to remove the rights of millions upon millions of American people.

The President is not an all-powerful being who can wave his tiny, Cheeto-encrusted baby hands and pass laws at his whim: he needs cooperation from all levels of government, and from the rest of the country. In spite of all the homophobic, xenophobic, misogynistic, racist, classist, divisive personalities that are taking root in DC, I still hope for the best—and I will always fight for it. 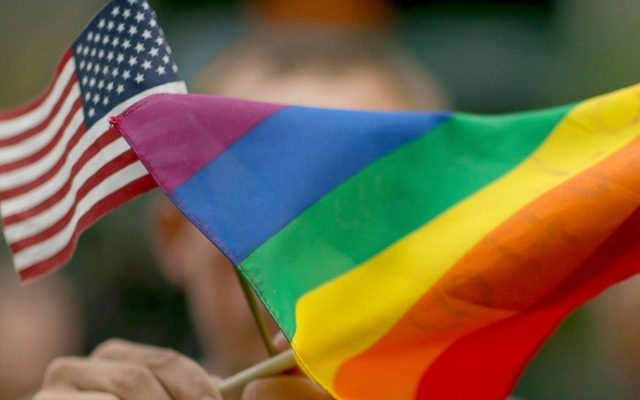